This example contains some ideas of how you can use Nach to manage a project easily and effectively.

Break the project into milestones

One of the advantages of Nach is the hierarchical Goal Map, which makes it easy to build up plans for extremely large and complex projects in a way which is still highly organised and manageable.

A typical approach for setting up a project on Nach would be to create a top-level goal for the completed project, and then break that goal down into major stages, with each one as a sub-goal, in chronological order.

Deciding on the most logical high-level stages to break a project into can be a little tricky if it's a process you're not used to, but taking the time to do so can add a lot of clarity to the overall process. For example, when contemplating adding a new step, it makes it easier to answer the question of "will this actually help achieve the milestone, or should it be ignored?"

Keep the plan lean and agile

One of the philosophies that Nach is built around is keeping things lean and agile - removing administrative overhead, and minimising all forms of distraction and clutter, to let you get on with achieving the important stuff.

There's no limit to the complexity and size of a plan you can create with Nach, but following this philosophy, we'd recommend setting up project plans on Nach in a similar way.

Don't try and plan too far ahead, as the future almost never turns out exactly as you expect. Instead decide on what the next few most important steps are that will make the biggest difference in bringing you closer to your goal, and plan those. As you're making progress, you'll have plenty of time to reflect on, update, and improve your plan, with the new information you learn as you progress through your project.

If you've already built up an enormous plan, with dates assigned to everything, changes will end up taking a lot longer to make. Whereas if you only have a few steps under each sub-goal, in priority order, changes are trivial

Nach makes keeping the Goal Map updated very easy. Steps can be re-ordered by dragging them up and down by their circular icon. By right-clicking on the circular icon you can also access a list of useful shortcuts, like the ability to rename a step, without ever leaving the Goal Map. Even if you want to restructure the hierarchy of your plan, this can be done with the "Change parent" option.

When there's important and relevant information to store for the project, decide what the most suitable step or goal to store it with would be, and add it to the Notes section. Remember that once a step is completed, it's no longer instantly accessible from the goal map. So if the information is likely to be highly relevant for longer than the lifetime of the step, it might be worth placing the note in the parent goal instead. 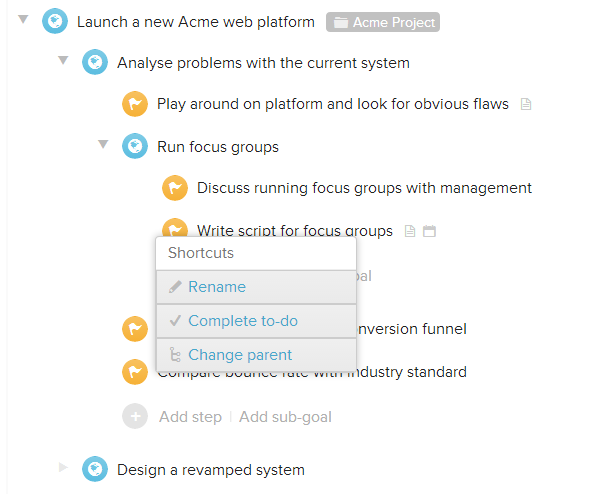 Stay on top with the To-Do List and Calendar

With an big project, there will end up being too many different things going on at once to keep them all in your head. Whenever something is only going to relevant at some specific point in the future, set a due date so that it will appear on your To-Do List only when needed. Take advantage of the email and SMS reminders too, if you want an extra push at the right time of day.

Time-critical steps show up on both the To-Do List and the Calendar, which are good ways to see the workload at a glance. If you've given the goal a category, both of these pages contain tabs at the top to filter down the content they display to only that specific category. This makes it no problem to manage multiple projects with Nach, or manage projects alongside other parts of your life. 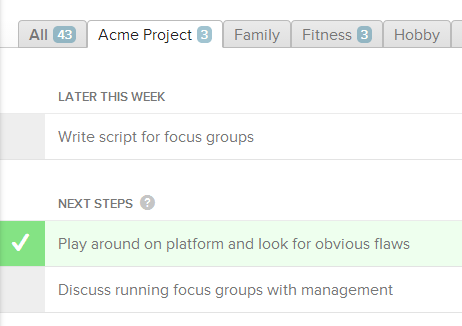 Use trackers to measure success

Once you get to the stage in the project where it's time to measure success, Trackers can be the ideal way to do this.

Think about what the most important metrics in the project are which determine success (for example, in a lot of businesses, profit), set up a Tracker, and start adding daily readings.

Use the Targets to keep track of whether you're meeting expectations, and if not, head back to the Goal Map and come up with a plan of how you can do something about that. Nach makes it as easy as possible to follow through with this process of iterating towards success. 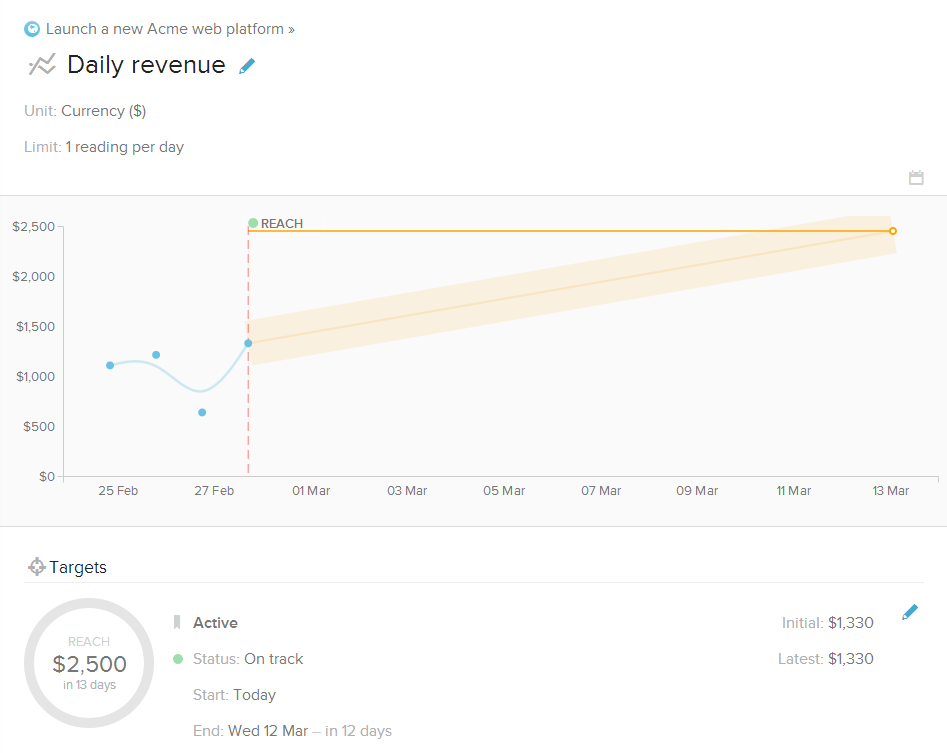