Introducing the Inbox and Quick-Add Shortcuts

We've just rolled out a new version of the app, which, among numerous tweaks and improvements, introduces two widely requested features.

Firstly, the new Inbox acts as a place to put odd tasks, or those which you don't yet have an organised goal to store under. From the Goal Map, the Inbox behaves like other goals - except that it can't be edited or deleted, and it can only contain steps (no sub-goals). The introduction of the Inbox allowed us to add another regularly requested feature - steps can now be quickly created from the top of the To-Do List, and will be placed in the Inbox.

The next big feature is Quick-Add Shortcuts, which is probably most easily demonstrated through a video:

These shortcuts let you define some of the most common attributes while creating a step, so you no longer have to click away from the Goal Map when setting up things like due dates or repeating options. For further information see our shortcut reference.

Forgotten where exactly you stored a specific note or piece of information? No longer a problem, thanks to the newly launched account-wide search feature. The new Search tab with the app puts everything you've ever saved on the app at your figertips - goals, steps, notes, attachments and trackers - even those which have have been long since archived.

The search tool also features lots of advanced syntax options - such as exact phrase matching (e.g. "new car") and wildcards (e.g. advert*, which matches anything from advert to advertisement).

You can even search against specific attributes of objects. To give just a few examples:

For a full list of available search modifiers, see the searching guide in the Help Center.

Bring Your Goals to Life with Cover Images

We've just introduced cover images - a new way to add some personality to your goals, by setting a custom image as a banner across the top of a goal's page. 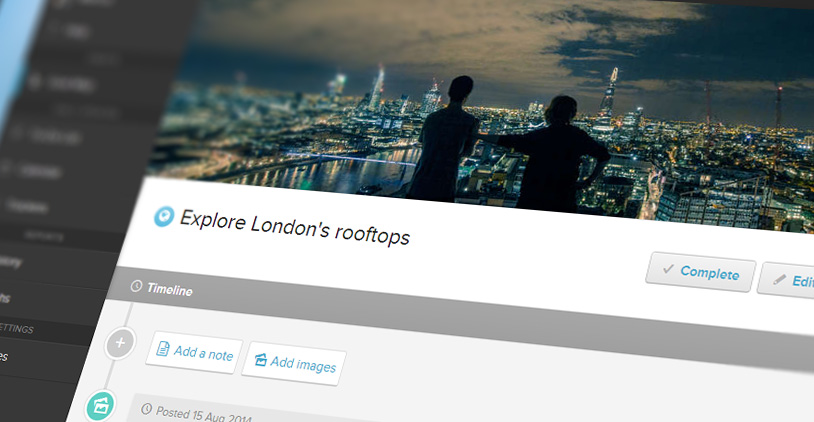 Any image attachment on a goal (note that this feature is only intended for goals, not steps!) can be set as a cover image, by clicking the "Make cover image" button beneath the thumbnail, as shown below. 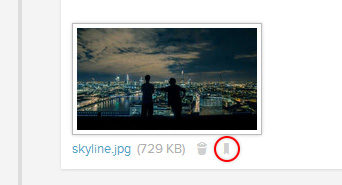 Once you've set a cover image, from a desktop/laptop, you can hover over it at the top of the page to reveal a couple of extra actions, visible in the bottom corner - removing the cover image, and jumping to the attachment which is set as the cover image.

We'd recommend setting cover photos for your big goals where possible. Having an aspirational image at the top of the page can be a regular source of motivation whenever you visit the goal, and also acts as a useful visual cue to remind you where you are within your goals - instead of just having to rely on titles alone.

We've added some new features to the shortcut menu, which make managing your goals quicker and easier than ever before. Remember that you can access the shortcut menu from the Goal Map by right-clicking on a step or goal's circular icon (or tapping it if you're on a touchscreen), and from the To-Do list by using the arrow button to the right of a to-do.

Managing the due date is still possible as it was before, by visiting the step or goal's page and using the Edit feature, but by adding them to the shortcut menu we're aiming to provide an even faster and more streamlined experience for keeping your Goal Map updated.

Stay tuned for more new features and improvements over the coming weeks!

Typical methods of quantifying productivity tend to focus around splitting time into productive time and unproductive time. This is a good start - being aware of where time is going can be a powerful wake up call, and can help to cut down on unequivocally distracting past-times.

One thing this won't solve, however, is work for work's sake - time spent in a way that on the surface seems industrious, but without any higher level thought into whether it's an effective use of time that's helping progress towards any important goal. It also won't highlight whether there's something more important being avoided, and working on an less crucial task is simply a form of procrastination.

With Nach, we're trying to take productivity tracking a step further, by looking at how productivity can be quantified in ways that relate directly to progress towards high-level personal goals. You may have noticed that the 30-day History chart has been given a bit of an upgrade:

Instead of just tracking goal and step completions, we've now taken the first move towards an improved quantification system. All actions on the site are now classified as either: positive, negative, or neutral.

Breaking down and categorising things down to such a granular level gives us a productivity logging system we're finding to be a more true representation of effective productivity.

Standard maintenance actions, like creating or editing a step, are neutral, and won't show on the graph. Achieving goals, steps, targets, and positive habit reinforcement, now all count as positive actions, and will lead to taller bars on the graph.

The biggest change is the introduction of negative actions, visible by ticking "Show negative actions" checkbox above the graph. This will introduce bars extending downwards below the graph, indicating negative actions taken during the day. These include: failing a step, goal, or target; not completing a step on the day it's due; and postponing a step (you can still edit a step's due date without it counting as a negative action - just don't use the "postpone" feature).

Instead of trying to measure time usage, we're measuring the discrete number of positive goal-oriented actions completed, as well as the number of missed expectations on the negative side of the chart. By design, every step on Nach can be traced up the hierarchy to a top-level goal.

The actions which constitute the history chart directly correspond to those shown on the Step History Chart, which can be edited if any adjustments are needed:

We're already looking into ways we can make these figures even more meaningful. Currently all actions hold the same significance (a +1 or -1), so introducing a weighting system based on factors like the significance and difficulty of the achievement, are one of the first areas we're exploring.

Anyway, we hope you'll find this latest addition as useful we are, and that it helps you look back and reflect on your own effective day-to-day productivity.