The ability to nest steps () and goals () into hierarchies is one of the features which makes Nach unique, and a suitable tool for representing anything from simple checklists, up to extremely large and intricate plans.

It can take a little practice to learn how to get the most out of this system, so this guide covers some of the best practices associated with mapping out goals.

Steps () are intended to be discrete tasks, which can be completed with a predictable and relatively small amount of time and effort. Goals (), on the other hand, are larger ambitions, which it may be helpful to break down into smaller, more manageable, steps.

A general rule of thumb is, if you feel a large sense of accomplishment from something (e.g. you'd be happy to tell others about your achievement), then it's important enough to be considered a goal. If it's a more tedious task, it should probably be a step.

For example: going to the gym is a small actionable task, so would be a step. Losing 20lbs isn't so simple and discrete, so would typically be a goal.

One caveat with goals: sometimes they can be something which you technically have no intention of completing, such as a reading list, which you add new books to whenever they're recommended. In this case, the goal is always on-going, and acting more like a way of grouping steps, rather than something which is intended to be worked through step by step and completed.

A sub-goal is just a goal which has been nested inside another goal. These are a useful way of creating smaller milestones inside a big goal, and organising large amounts of steps. Just like top-level goals, sub-goals can be paused when you're not currently focusing on them, which keeps things organised by hiding everything inside them (the contents can still easily be expanded when needed).

Be careful not to overuse these, as too many nested sub-goals quickly become impossible to manage. Sometimes newcomers to Nach will attempt to nest several sub-goals in one very deep branch in the order they're expecting to complete them. While there's nothing stopping you from doing this, we've found that this approach becomes difficult to manage very quickly, and wouldn't recommend it.

Instead, we'd recommend keeping lists as flat as possible, and only breaking something down into a sub-goal when there's a very clear organisational benefit from the seperation of different interests. 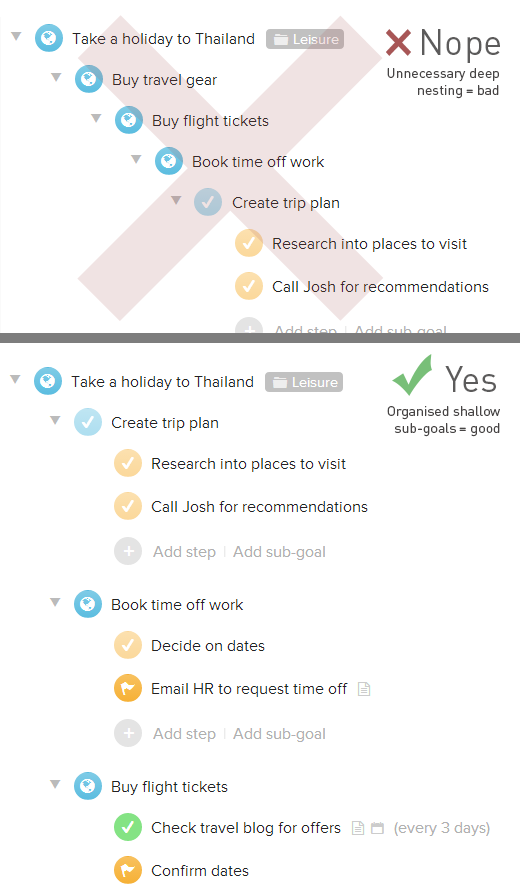 Let's take the example of preparing for a holiday. Three reasonable sub-goals which would make sense as milestones would be: Create a trip plan, Book time off work, and Buy flight tickets. These all work well as sub-goals, because they each consist of several discrete steps, so work well as organised step groups. The approach we'd recommend here, is to keep all these 3 sub-goals in a flat list, under the one main top-level goal (taking a holiday). These sub-goals can all be carried out in parallel, so rather than trying to force an order by nesting them inside each other, keeping the sub-goals on a parallel level, and dragging them up and down to show their relative priority, is a much easier approach.

To see some real-world examples of goal map hierarchies, take a look at our examples section.